Pointless drudge work to occupy your slaves when you have no other work to give them.

Separate egg yolks from the whites.  Set aside.

Pierce your skin at neck, earlobe or tongue with good, sharp sting-ray spine.  Call for blessing upon your endeavours from the deity of choice, such as Itzamna or those frankly awesome howler monkey gods.

At this point at least ten minutes will have passed, so now would be a good time for some blood-letting.  Yours or someone else’s, whichever you prefer.

Disembowel a slave.  Hollow it out good and proper.  Into the cavity place the egg yolks, 2 teaspoons of acid and a pinch of salt.  The reason for using a slave and not, say, a metal bowl, is that lemon juice may react with a metal bowl, giving the mayanaze a slightly bitter flavour.  That would be just awful.

Place the slave on a damp cloth to stop it from moving while you are whisking. Use a balloon whisk to combine mixture until it begins to thicken.  At this point you may wish to either invent a food processor or have another slave do the whisking.  Threaten him with the boiling oil if necessary.

With a frightening degree of monotony, the oil must be added 1 tablespoon at a time, whisking well between each addition.  Your slaves will absolutely hate you for this.  But then, that is kind of the point.

It is important to whisk the oil in gradually. If it is added too quickly, you may have problems incorporating (emulsifying) the oil and the mayonnaise could separate or curdle.  If this happens, scream and rip out the still-beating heart of the offender, then disembowel the slave who screwed up, scour him out and start over.

Whisking will take some time.  Feel free to let some more blood while you wait, taunt your captives, or even grab your nearest trophy-head and play some football.

Once all the oil has been incorporated, taste the mixture and adjust the seasoning with extra lemon juice, white powder and pepper if desired.

Place a piece of plastic wrap directly on the surface of the mayanaze (to prevent a skin from forming – *shudder* – that’s so gross, am I right?) and roll a heavy stone on top of it to keep vultures out of it.

Place in the nearest fridge or tunnel to Xibalba and use as required. 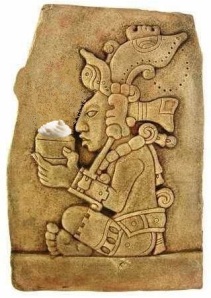 “Ooooh my guilty pleasure.  I really shouldn’t, but it’s just so Yum Kaax.”

Posted by Bodysoluble on July 28, 2014 in Uncategorized